This hall was built at the end of the 16th century in the centre of the Old Town in what was then the High Street or "Calle Mayor". 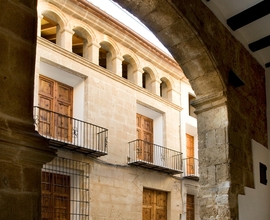 Its main function was commercial since it was here that the wheat was sold and farm workers were hired, activities that were essential in the Middles Ages. It was also used as Town Hall and its reduced rooms were used for council meetings, archive, administrative chambers and prison. In the 20th century it was used as single classroom school. Inside the building there is still an old almond shelling machine, invented and patented by local businessman Silvestre Ivars, and that was very successful in the ‘30s.