The 5 best summer festivals you can't miss in Benissa

The heat has arrived, and with it the summer festivals. Come and enjoy the festivals of Benissa, you won´t regret it.

Benissa and its summer festivals

The town festivals are an essential part of Benissa and there are lots of summer festivals held here. In this post we are going to specifically tell you about 5 fantastic festivals that take place in July in rural districts or neighbourhoods in the historical centre of Benissa.

The festival of the district of San Antonio 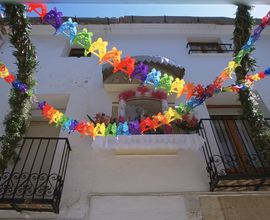 The first festival of July is that of the district of San Antonio, a festival that is held on the street of the same name.

As tradition states, you cannot miss the “Entrà de la murta” (Entry of the Myrtle), where in addition to enjoying the music of the dulzaina (a kind of pipe) and drum music accompanying the parade, at the end of it, you can explore the street and experience the aroma of the myrtle.

The neighbourhood parties are one of the most enjoyable experiences of summer, bring your dinner and enjoy outdoor music in an outstanding setting like the old quarter of Benissa.

Another notable event of this charming festival is the parade with the image of the patron saint of the neighbourhood, San Antonio, always accompanied by the dulzaina and drums up the Church.

The festival of the district of Pedramala 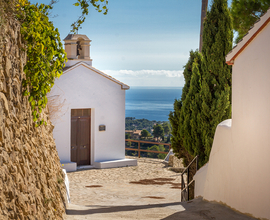 This festival is special, not just due to its acts but also thanks to the spectacular setting. If you don´t know about the hermitage of Pedramala, in honour of San Vicente Ferrer, you need to visit it, as its views over the sea are spectacular.

The festival of Benimarco or San Jaime 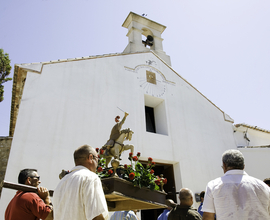 The festival of San Jaime takes place in the rural district of Benimarco, in a small square next to the beautiful hermitage of San Jaime which dates back to 1884. To its left and separate from it, we have what was once the schools. From here you can enjoy impressive views over a stretch of the coastline.

This festival is one of the highlights of the summer festivals of Benissa. This district, located between the municipalities of Benissa and Teulada, enjoys no fewer than 8 days of festivities, which reflects the importance of this small population centre. The traditional planting of the pine tree, chicken races, public lunches and processions as well as parties and events with young bulls (vaquillas) are some of the events that you can find in this marvellous place. It is worth highlighting the day of San Jaime, 25 July, where after enjoying a gastronomic and musical day, fireworks are let off; and the day of Santa Ana, the 26 June, in which you can participate in a paella competition. Don´t forget to try the homemade lemon water!

The festival of Santa Ana 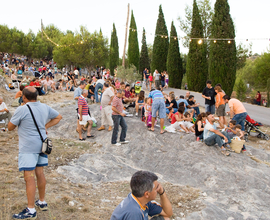 This district of Benissa also has its own festival, the day of the patron saint, on 26 July. Its hermitage, in a beautiful setting, is the oldest in the municipality. Dating back to 1613, it has a beautiful facade made from sandstone with a semi-circular arch door. Make the most of this day to discover its interior and view its prized “al secco” Baroque style paintings dating back to 1709 that can only be observed during the festival, being the hermitage closed during the rest of the year.

Among its events, you cannot miss the pilgrimage to the hermitage, and after it, it is traditional to bring typical cocas (flatbreads) with pisto or oil, which you can purchase in any bakery in Benissa, and have a picnic on the way down to the hermitage. And what better way to end the night than with the party in a very rural setting. 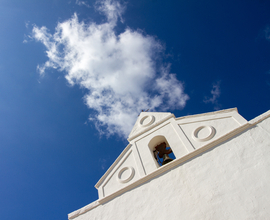 Lastly, we have the festival of the district of Lleus, another of the summer festivals in Benissa. It is there traditional to taste the typical flatbreads (cocas), generally offered by the committee to the attendees, and of course followed by the typical party, always in the best setting, next to the beautiful hermitage of Lleus, which dates back to the 19th century.

Another of the events to highlight is the entry of the “Pa Beneït”, a typical dessert that is normally given out in religious festivities after mass. And after it, there is the traditional chicken race, where the little ones can have fun.