What to do in the old town of Benissa

Benissa, in the province of Alicante near Benidorm and Calpe, stands out for being the largest municipality in the Marina Alta region, as well as for the varied heritage in its medieval old town. Additionally, Benissa has 4 km of sandy beaches and rocky coves. If you are travelling to Alicante, a visit to the old town of Benissa is a must.

¿What to see in the old town of Benissa?

The Sala del Consell, located in Calle la Puríssima, in the heart of the old town of Benissa, was built at the end of the 16th century at a time of great economic expansion. The Sala del Consell or Lonja de Contratación (Exchange) housed the sessions of the Council and the archive. However, it also served as “Almudí” (for the storage and sale of wheat and other cereals). 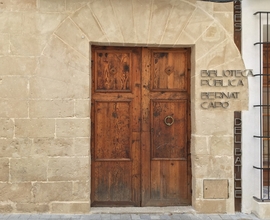 The Cases del Batlle used to be home to the mayor of Benissa and receive their name from it. They are located in front of the Sala del Consell. Currently, they house the Bernat Capó Municipal Library and also the interesting art gallery Espai d'Art Contemporani Salvador Soria, in which you will find the municipal collection of art from the painting competition named after the artist who died in Benissa.

The Casa Abargues, a must-see, is a manor from the 18th-19th centuries located in Calle Desamparats, one of the most beautiful streets in the old town of Benissa. This house has a noble atmosphere, private dining rooms, storage rooms for agricultural products and a private chapel. The spectacular Saló Blau (Blue Room) has to be highlighted.

The Monument for the "Riberer" 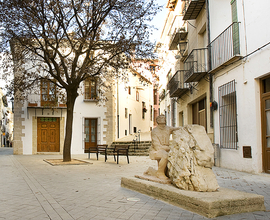 This monument represents the Riberer, a character with a long tradition in Benissa. For centuries many “Benisseros” used to walk to the rice fields of the Ribera, in the province of Valencia, for some extra income to cover their needs.

Among the things we can see in Benissa the "La Catedral de la Marina" stands out for being one of the largest churches in the region. The construction of this church began in 1902 and was completed in 1929. It is 35 metres high and neo-Gothic in style.

History of the old town of Benissa

Originally, the urban nucleus of Benissa was a Muslim farmhouse or settlement, managed by a Berber clan or family, the Banu-Isa. It was located between what are today the streets of Santa Anna, Puríssima and Mossèn Gaspar Tello.

In 1244, the troops of the Crown of Aragon led by King James I (Jaume I) arrived in the area and began a colonisation process in which the Christian settlers, peasants and members of the troops, of Catalan and Aragonese origin, were concentrated in certain areas, especially in the coastal regions. One of the aims was to control the Muslim population in the dispersed farmhouses. Benissa is one of the places where the settlers were brought together and coexisted with the Muslims. The Moorish population lived peacefully together with the Christians until the former were expelled in 1609. 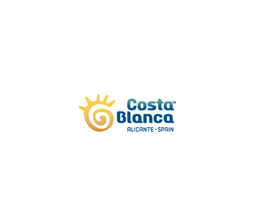