Art and Culture in Benissa

Benissa is a town where you can breathe art and culture in every corner. A town with many cultural concerns and with a varied program that is presented monthly in what is known as Obri l’ull.

Art and culture in every corner.

Its medieval historic centre offers a great artistic value. In addition, the historic centre has a Museum of Contemporary Art dedicated to the work of Salvador Soria and the works presented to the contest with his name.

It is a delight to walk through the Historic Centre of Benissa, perfectly preserved, and discover the great museum shaped by its buildings. Cobblestone streets, centuries-old walls, Moorish railings, coats of arms and ancient stately homes transfer visitors to the Middle Ages.

Do not miss the Sala del Consell (XVI century), the Convento de los Padres Franciscanos (XVII century) or the Iglesia de la Puríssima Xiqueta, popularly known as the Cathedral of the Marina, a neo-Gothic building from the beginning of the 20th century. You must also visit the Casa Museo Abargues (from the end of the 18th century) that shows the typical way of life of a stately family in Benissa. The house retains all the furniture and atmosphere of the time.

This 16th-century building houses the Bernat Capó Public Library, an Assembly Hall, the Salvador Soria Museum and the offices of the municipal department of culture. The building is also known as the Cases del Batlle, so named because the mayor of Villa de Benissa lived there.

Entering we find a set of silos, since in Andalusian times the land where the building is located housed the public house for the purchase and sale of wheat. The silos were grain storage structures characteristic of medieval times. These are deposits excavated directly on land, in areas with poorly permeable soils. Once the grain was introduced, the mouth was sealed with straw and a stone slab so that the cereal could be preserved there for years. The lack of moisture and oxygen made the survival of insects or rodents impossible.

Who was Salvador Soria? 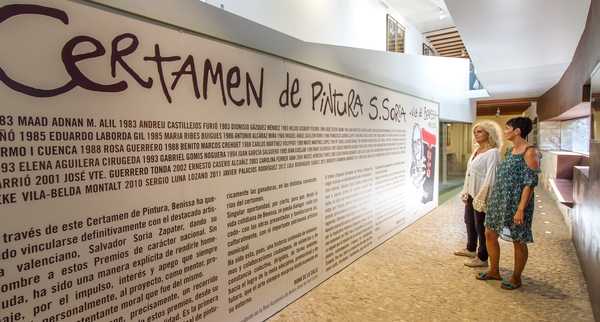 The Painting Contest is closely linked to the character of Salvador Soria Zapater, Valencian painter and sculptor closely related to Benissa since in 1969 he decided to settle in these lands. From the first moment, Soria helped in the organization of the contest, supporting him and participating as a jury in all the editions held until his death in 2010. His artistic prestige and reputation facilitated the appearance in Benissa of accredited critics and renowned plastic artists who have contributed to the national recognition of the contest.