The best beaches with crystal clear water for snorkelling

Are you a snorkel lover? Would you like to know the seabed? Well, in Benissa you have the opportunity to practice this sport along its almost 4 kilometres of coastline.

Snorkelling along the coast of Benissa

Discover an incomparable seabed and coves and beaches of crystal clear water doing sub-aquatic excursions. We also recommend you to surface and visit the ecological walk that joins the coast of Benissa from Les Bassetes cove to the Advocat cove. The temperature is pleasant throughout the year; the average temperature is never lower than 12 degrees in any month. The months of February and March are the coldest, with an average of 14 degrees Celsius and more than 20 degrees during the months of June to October.

Do you follow us? Pick up your diving mask, flippers and snorkel and we will discover this fantastic world.

We will begin exploring the bay of les Bassetes. During this route, you will see a background of oceanic Posidonia, a true lung in the sea. Posidonia is abundant here, and is continually visited by the salema porgy. On this route, you will also find Mediterranean chromis, painted combers and Mediterranean rainbow wrasses. In June and early July you can observe the young of the Mediterranean chromis. Among the rocks it is possible that you find some octopus waiting for darkness to go hunting.

Continuing on La Fustera beach, one of the best beaches in Benissa, we will find brilliant salema porgy and pipefishes, common in clear and superficial waters that are somewhat funny, even fragile in appearance, which is not quite true. Among the rocks we will find white seabreams, painted combers, wrasses and Mediterranean rainbow wrasses, they have a very vivid coloration and, when they notice danger, or during the night, they are buried in the sand. 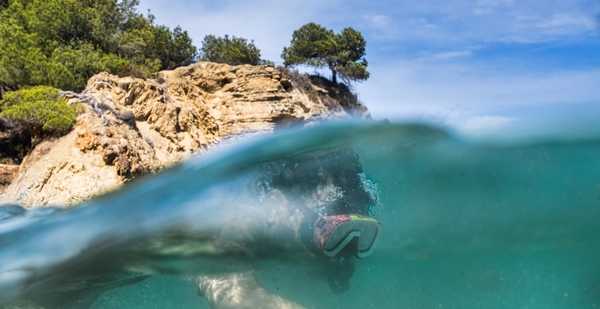 In Els Pinets cove, we will start the route from the left of the cove, where a few meters away we will 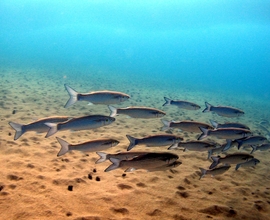 find the Mar morta (Dead Sea), a low level sea inlet with rocks that protect it against the waves and create a small natural swimming pool. On this route we will find rock formations as small rocky islands covered with Posidonia, where small and striking fish of beautiful colour such as Mediterranean rainbow wrasses, ornate wrasses or Mediterranean chromis find refuge. In the Pinets cove you can observe three different submerged environments, each with its typical life: the sandy area where spotted flounders, sea bass and flathead grey mullets are camouflaged; the hard rock bottoms where fish and small crabs or octopus find shelter in their crevices and the Posidonia meadows that, in addition to oxygenate the water, serve as nursery for the young fish. 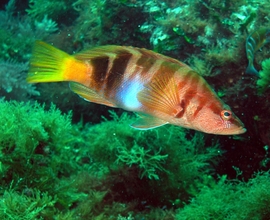 La Llobella cove is the wildest of all, shortly after entering the water there is a submerged rock platform. We will make a trip to the right, flying over a seabed about 4 or 5 meters deep. As we approach the right side of the cove, we will find large rock formations, and there white seabreams, painted combers, ornate wrasses or even spotted flounders that mimic the stones. Due to the orientation of the Llobella it is recommended to make the route in the morning, since with the sun you can enjoy even more the seabed.

Next stop ... Advocat cove, where as a swimming pool, we will access by a staircase next to the 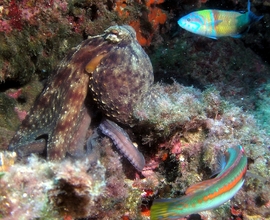 rocks. In this beautiful sandy cove, we will find the excellently preserved Posidonia meadows and huge groups of salema porgy. As we approach the final part of the cliff that overlooks the Baladrar cove we will find nooks where octopus and painted combers hide. Here it is common to find starfishes and sea urchins between rocks and posidonia. Did you know that not all starfishes have 5 arms? There are many of them with more arms; they can reach a figure as high as ... forty!

And last but not least is the route of the Baladrar cove, starting on the right side. Here the seabed is 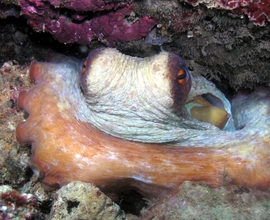 formed by slabs of polished and bare rock, little by little the posidonia appears, which hosts innumerable species such as salema porgy, white seabreams or hidden octopuses, wrasses or red mullets.

As a curiosity, the octopus has 3 hearts and… and blue blood! In fact, it acquires its bluish tone since it uses hemocyanin to transport oxygen.

We encourage you to practice snorkelling on our coast, a unique experience that you will love!

And if you don't dare to do it alone, you can request the services of the Les Bassetes diving centre, they will guide you and teach you the best tips so you can discover our wonderful seabed like a fish in water!