In 1611 a group of Franciscan monks settled in Benissa where they founded the Convento de la Inmaculada Concepción (Convent of the Immaculate Conception), monastery that opened on the 23rd September 1613.

The construction of this building meant the extension of the town towards the west and at the same time configured a new bastion giving protection against the pirate attacks that were rife at the time.

This is a very sober construction with robust walls that remind us of renaissance architecture. The church door has been made like a carved 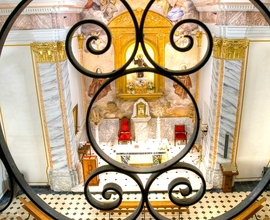 wooden altarpiece made up of two parts: the first an arch shaped door framed by two columns on pedestals and the second takes the form of a vaulted niche framed by two pillars which houses an image of the Blessed Virgin Mary and two pyramids with spheres that show the influence of "Herreriana" arquitecture.

As far as the building is concerned it's worth pointing out the bell tower and the cloister, elements renovated in 1992. Inside the church there is an interesting altarpiece and a small museum in which the visitor can see various pieces that originated in the monastery, the old seraphic school, and souvenirs and other objects donated to the order by the monks throughout the long history of the monastery.