Benissa, a medieval place for delving into the past

Do you want to find out what you can do in June in Benissa? Well, here we provide a plan you simply can´t turn down: discovering the Moors and Christians festival. This festival commemorates and re-enacts the Reconquista, that is to say, the victory of the Christian side led by James I over the Muslim side led by the Moorish leader Al-Azraq.

Benissa has an historic centre of medieval origins that we recommend exploring; you will delve into another era. 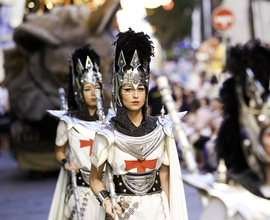 Festival declared to be of tourist interest

The Moors and Christians festival of Benissa was recently named a Festival of provincial Tourist Interest, which gives it great prestige. The festivities, in honour of St Peter, are held on the weekend closest to the 29th of June. 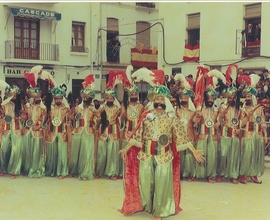 Origin of the Moors and Christian festival in Benissa

The start of this festival is linked to the patron saint festivities of the Puríssima Xiqueta. Specifically, it was in 1974, following the social and economic change there were new professional needs so workers linked to the property sector came to Benissa from Xixona, Villena, Alcoi and Concentaina. They yearned for their origins, including a strong tradition of festive associations. A group of technicians from a construction company, with the consent of the Council, asked permission for the program of festivities to include one improvised filà (line) of local people from Benissa and another filà from Xixona, along with a third comprised of women from the former. By 1979 it was patently clear that the festival had a significant importance, so from 1980 on the Moors and Christian festival in honour of St Peter was completely separated from the Festivities of the Puríssima Xiqueta.

We want to highlight...

Spectacular parades with lavish costumes that will make your jaw drop, music, street songs, pipes and drums, fireworks, embassies that venerate old battles, these are some of the events that you can enjoy over this time: 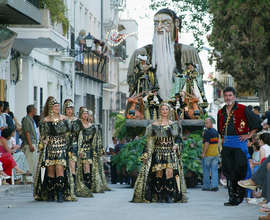 One of the most important events of the Moors and Christians festival is the parade on Saturday, a parade where the 5 filaes (lines) of the Christian side and the 6 filaes of the Moorish side, accompanied by their corresponding musical groups, exhibit all of their splendour from the València Street up to the end of the Nou Street. This is a very colourful event with admirable costumes, ancestral dances, battles and music that give the parade all of its great splendour. 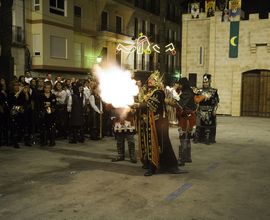 Moorish siege and the Moorish embassy of Benissa. Sunday night

On Sunday, when it begins to get dark, the siege of the Moorish side begins from the square of the convent up to the castle enclosure; the different lines of Moors shoot their arquebuses into the air as a form of combat. The Moorish embassy, a re-enactment in which the captain, ambassador and sentry of each side participate, usually precedes a battle with arquebuses, and moments later the Moors take the castle. 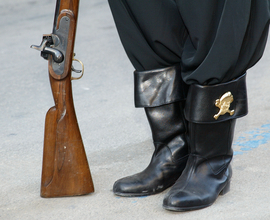 Christian siege and the Christian embassy of Benissa. Monday morning 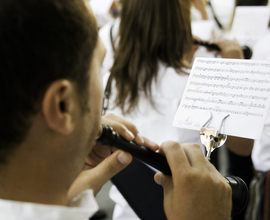 Music plays an important role in the festival. On the Thursday before the parade, a festive music concert is held in the Jaume I Square by the Colla de Xirimiters Pere Bigot and the Lyric and Musical Society of Benissa.

Also, with regard to musical creation, the large majority of the filaes (lines) have their own pieces of music, two of them, the filà Llauradors and the filà Califes, have pieces composed by local musicians.

It should be mentioned that on Saturday night, after the big parade, the filaes have dinner in their Cábilas (own premises) and then perform music with their bands or brass bands for anyone who wants to come visit.