Did you know you could also admire cave paintings in Benissa?

Our town is counted among the locations in the Valencia region blessed with the characteristic cave paintings of the Mediterranean coastline of the Iberian Peninsula, namely Levantine Art and Schematic Art.

Now is the time to discover the changes in colour wrought by autumn on our natural landscapes and to hike through our mountains at midday once again. Furthermore, if you were to discover some small gems of our heritage, it would make for a most complete and interesting outing indeed. Here you will learn about where our cave paintings are and how to visit them.

You can reach the archaeological site on foot, following a hiking trail of approximately 5 km from Benissa.

If you prefer, you can also drive and park your car off the side of the road to access the place where the paintings are located on foot. This is near the Pinos rural area, in a place known as the Abrigo de Pinos [Pinos rock shelter], though this name is unknown to the locals, who call it the Barranc de la Tia Isabel. 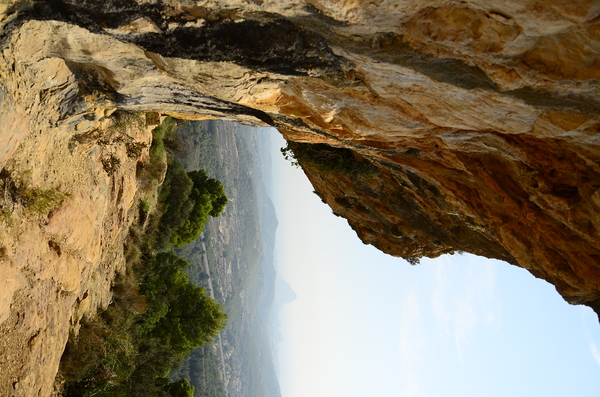 The rock shelter is a limestone salient slightly over 200 metres long with a number of shallow caves, including the one that contains the rock paintings. These were discovered in 1970, and in 1985 they were declared an Asset of Cultural Interest and, subsequently, a World Heritage Site. The paintings are protected by a metal fence built over a stone wall that allows visitors to observe the paintings without drawing too near. Close to this area is also a building known as a corralet and which is a sample of traditional livestock architecture in the area. 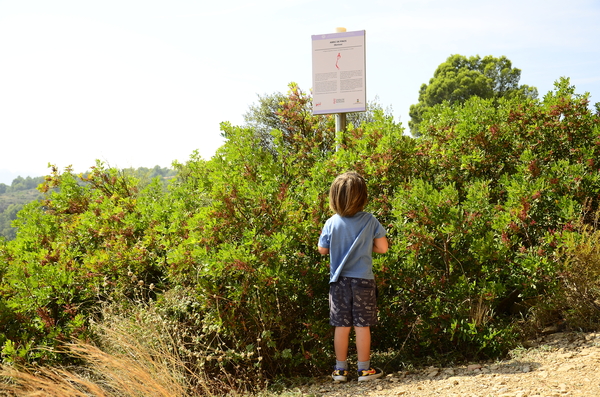 Alongside the cave paintings are four information panels that will give you clues to orientate yourself and to get a better idea of the contour of the figures camouflaged on the rock. A bit of imagination is required to see the drawings properly, among which a female figure, which is known as the Eva Pinera [Eve from Pinos], stands out. She is a svelte figure with her arms akimbo who has become a symbol of the site and which experts have dated between 6,000 and 8,000 years ago. Scarcely 50 centimetres away is a Levantine-type zoomorphic representation that is partially lost, and which depicts a pair of deer with their hind quarters against each other. There is also a composition with four anthropomorphic figures with crescent-shaped headgear standing in a row, with some of them holding hands. 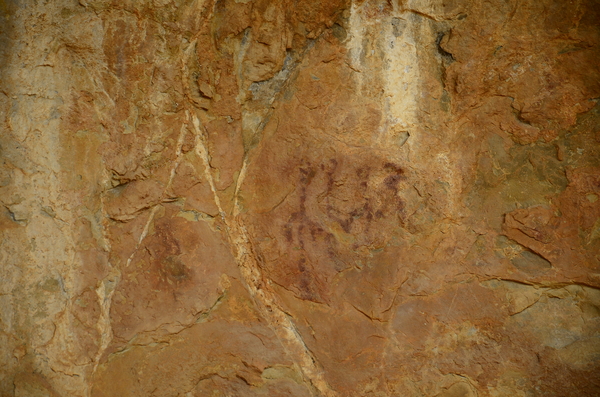 The site can easily be visited as part of a hike through Pinos and/or Bèrnia. Children will love it, as the place is quite evocative and conjures up adventures and stories of characters who may have lived in ancient times on these slopes with spectacular views to the sea, with Calpe rock in the background.